Finding a Hidden Gem in A Totem Carver’s Studio

During our first visit to Sitka in 2010, we spent time exploring many of the historical sights in town. 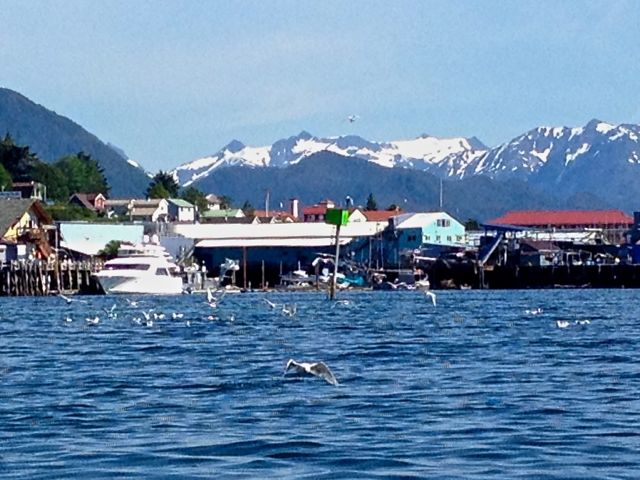 This visit, we were interested to see more of the waterfront outside of our harbor, so we put the tender in and headed south into Sitka Sound, where we discovered an entire group of small private islands with some lovely private homes perched along the water. 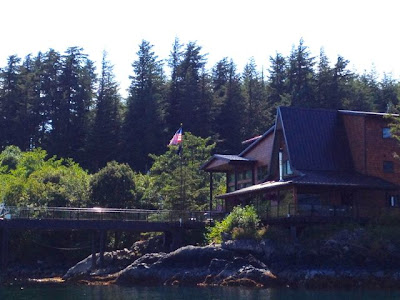 Also during our time in Sitka, we enjoyed walking the town, and especially visiting the art galleries ... where we acquired a lovely woodprint by Eric Bealer, the quirky wood engraver we had met in Pelican, with his puppy Truffle.

For years since we’ve had Engelenbak, we also have been looking for the right piece of art to put in a particular spot on the boat in the salon. As we were walking back from the Sitka Historical Totem Park we saw a sign for a totem carver workshop ... where we had the good fortune to meet a talented Tlingit 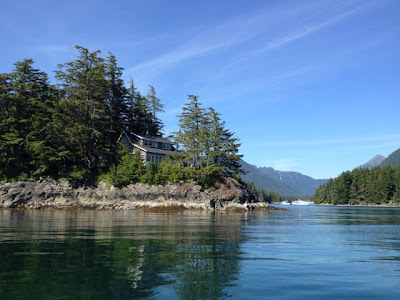 artist by the name of Tommy Joseph.

In his studio, we saw an unfinished wood carving of a Tlingit canoe ... with what looked like a frog climbing aboard the transom. He told us it was a piece he had begun carving years ago but never finished.

We convinced Tommy to bring the piece to the boat the next day to size it up for the “spot” we were thinking of ... and it fit perfectly. Now we just had to work out a timeline for when he could finish the carving and paint it ... and where we could pick it up.

Turns out he was going to be in Klawock in two weeks for a totem raising and potlatch ... so we made arrangements to meet him there, sometime over the weekend of August 16.

Can’t wait!
Posted by Laura, Roland and Lovie Ricochet at 2:12 PM No comments:

The Art of Being a Nautical Nomad

We are like nautical nomads, going from place to place ... some of us prefer to anchor, others prefer to dock ... but ultimately we are all wanderers, and none of us stay in the same place very long.

Places to go ... and so much to see. Especially in Alaska.

I guess, with much in common, some of our most enjoyable Alaska experiences have been meeting fellow boaters. And in Sitka, we docked next to such a couple ... Don & Linda from California, on their Hampton 63 ... appropriately named ... La Bella Dolce.

We immediately bonded with Don. The next day his wife Linda flew in from California and we all enjoyed dinner at the Channel Club, a nice little restaurant 3 miles out of town.

One thing about cruising is you always need to provision when you get the chance at dock, so we all shared a cab into town the following day to the local grocery store ... with a parking lot view unlike any grocery store I’ve ever visited.

We had Don & Linda over for dinner that evening and he shared a great many pointers about where to fish for salmon, crab and prawns.

Even better ... the next day when we were leaving he brought over a detailed list with coordinate points of the best places to drop prawn and crab traps for our future voyage ... a list I dare not share on this blog ... but have dutifully taped to a page in our log book!

We hope to cross paths again with this wonderful couple on La Bella Dolce!

Posted by Laura, Roland and Lovie Ricochet at 9:59 PM No comments:

The Sitka CAT ... One of My Favorite Photos of the Trip

We’ve had an amazing trip ... with great wildlife photos. Whales, sea lions, sea otters, eagles, bears, and so much more.

But this photo ... shot from our boat in Eliason Harbor in Sitka ... of the dilapidated boat next to us, is one of my favorite photos of the trip. 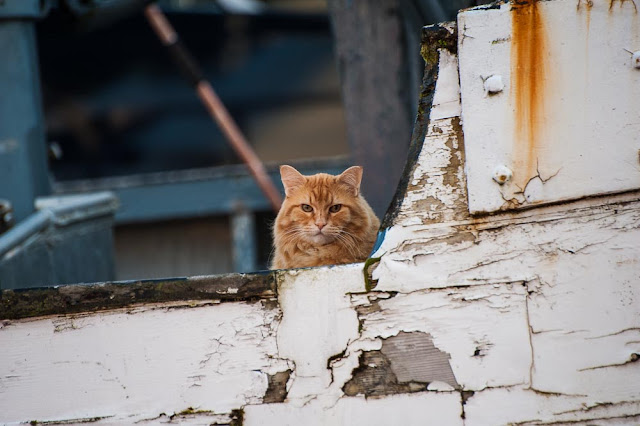 CAT, the only live body we could see on the boat Pacific,  seemingly has a story to tell. 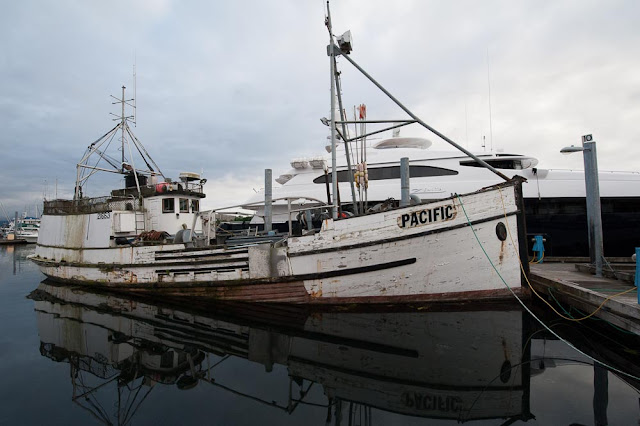 Pulling back, the shot is even more dramatic when you consider the juxtaposition of this old boat with the mega yacht moored behind it. 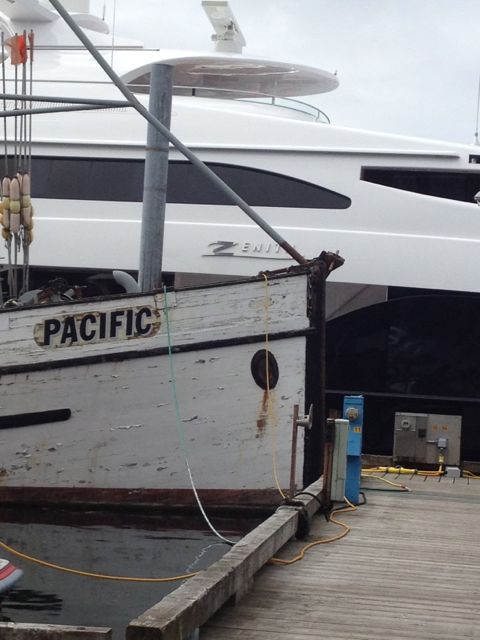 The next day, we saw humans on Pacific, and I felt better that CAT was being taken care of. But still love the photo ... and want to hear his story! 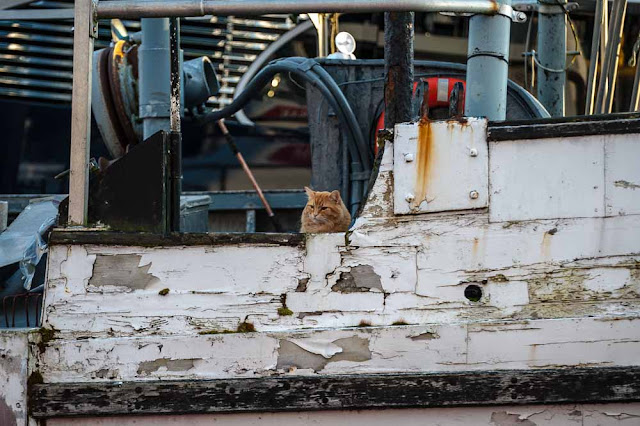 Posted by Laura, Roland and Lovie Ricochet at 9:16 PM No comments:

A Hole in My Heart For My Brother John ... One Year Later

July 25 – Pelican to Waterfall Cove, inside of Khatz Penninsula

July 25 was a really tough day for me ... and the weather matched my mood. 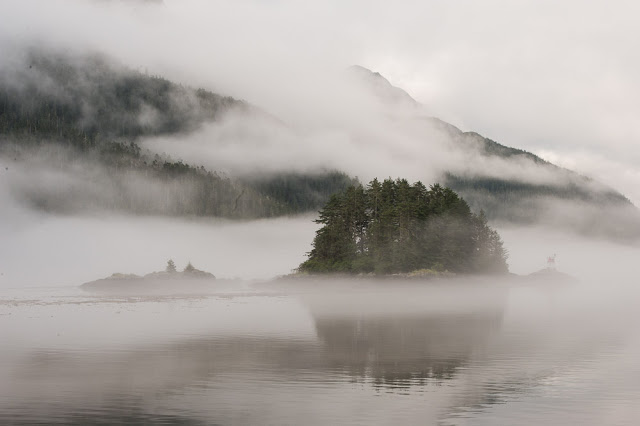 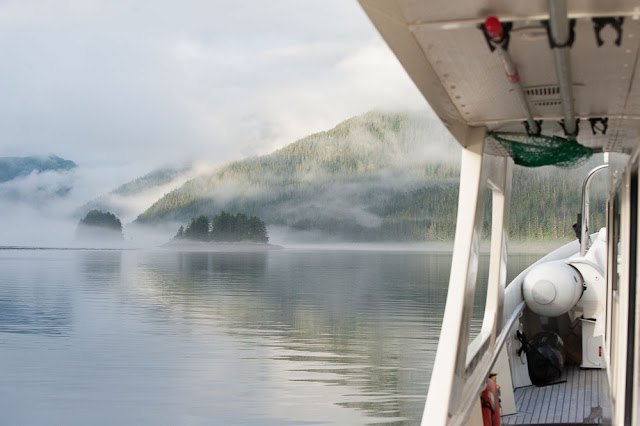 One year ago today my younger brother John died. Metastic melanoma ... he was gone in two weeks ... and it should have been detected so much sooner. His death shouldn't have happened.

Not one day has gone by in the last year that I haven’t thought of him. And how the medical system failed such a smart, caring, successful business owner ... a devoted husband and nurturing father ... who should have lived to see his three children grow up and have families of their own. 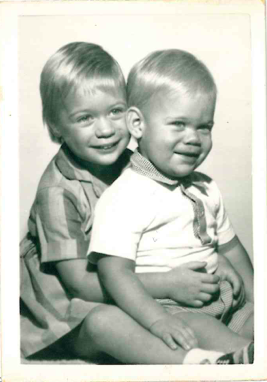 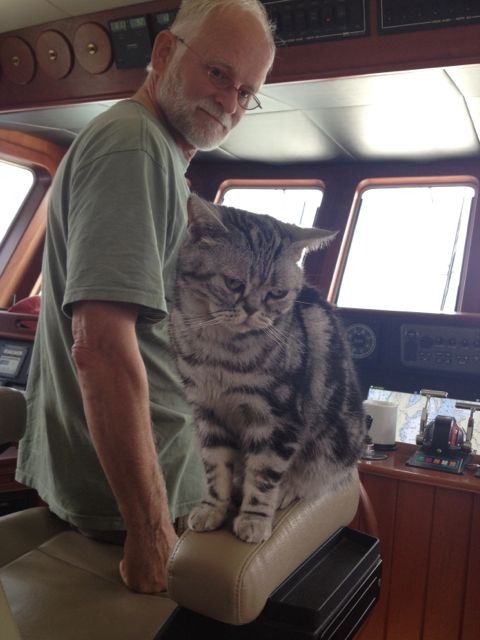 I climbed up into the pilothouse with tears in my eyes ... and told Roland I missed my family.

He knew where the tears were coming from.

My husband, my most adorable and loving new spouse ... put his arms around me, hugged me and said ... Lovie and I are your family.

Roland's words didn't take away the pain ... or the tears ... but he gave me comfort.

I thanked God for Roland ... our love ... and prayed for his continued health.

And I told my brother John ... that I love him and miss him.

Posted by Laura, Roland and Lovie Ricochet at 8:03 PM No comments: 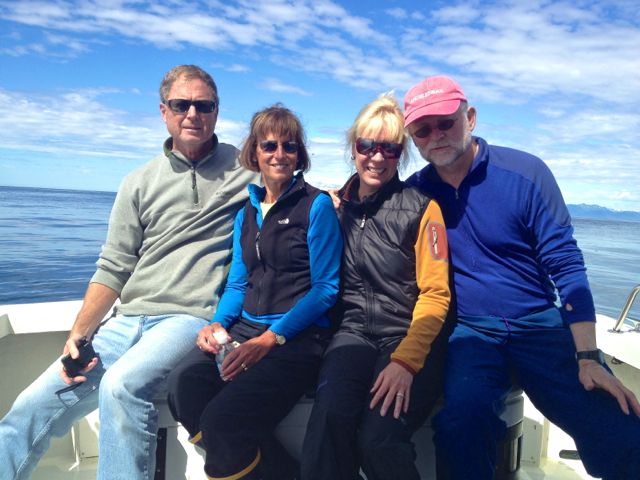 After a week of so-so weather, we were thrilled to see sun and azure blue skies on the day Lee generously treated us all to a charter fishing trip. Our trusted charter captain, Terry, was also the winner of the annual Pelican Salmon Derby back when we were in Pelican in 2010 with Lydia, Eric and Cade ... so we knew we would have a pro with local knowledge. 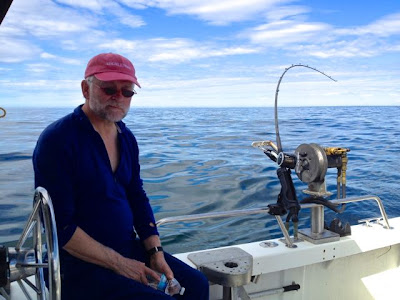 It took us two hours heading out the Lisianski Inlet to the Lisianski Strait to get out to the Gulf of Alaska ... to Terry’s “secret” spot.

With little wind, the Gulf was calm and when we reached our target, Terry pulled out his salmon rods and loaded us up with bait and sent them down with the downriggers. Within no time JoAnn hooked a nice king salmon and she and Roland took turns bringing it in. 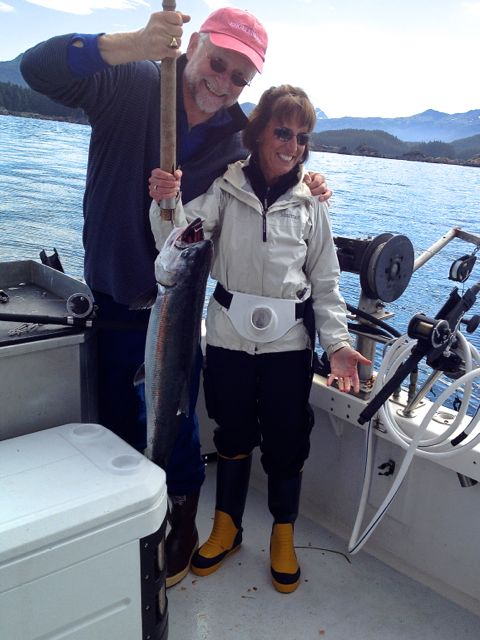 We also caught a few humpies and silver salmon, which Terry bludgeoned to death to chop for bait later when we fished for halibut. Then Lee caught a beautiful king, and I already was conjuring up creative salmon recipes. 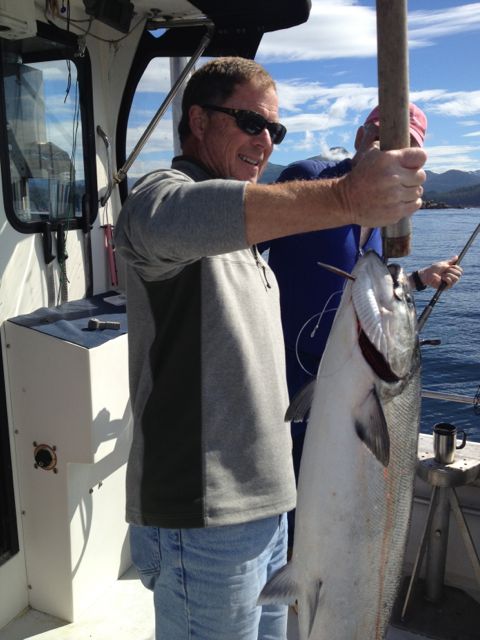 Knowing that Lee and JoAnn had to fly out later that afternoon, we didn’t want to miss our chance to fish for halibut, so we pulled up the downriggers and Terry moved the boat to his halibut “secret” spot.
Halibut fishing is hard work. Largely because they are deep bottom feeders, so you’re dropping a line with a large weight on it 350 feet deep. And every time you drop a line ... you ALSO have to reel it back up!
They say the best halibut meat is a smaller halibut, 30-50 pounds, so we were delighted when JoAnn hooked a 40-pound halibut and she and Roland took turns bringing it in.

But the BIG catch of the day was mine. And I initially didn’t even know I had a fish on my line. I started to reel up my line to move to the other side of the boat where the sun was ... and all of a sudden something started taking the line out.
I couldn’t stop it, so Terry told me to let it run and tire itself out ... until we realized it wasn’t tiring and I was running out of line! So that’s when I sat down and braced myself against the side of the boat to try reeling this thing in. And almost was pulled overboard in the process!
Terry quickly came to my aide and based on what he was feeling (even he was struggling to reel in this fish) he said he bet it was at least a 200-pound halibut. Lee joined in the action as well, and after a lot of work, we finally got the fish to the surface and everyone was in awe. 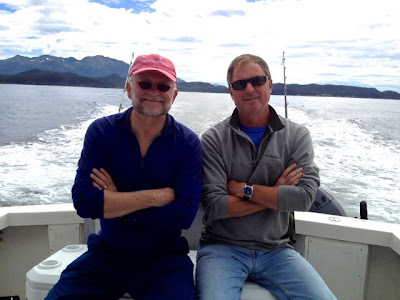 Terry measured it at about 76-inches, which according to the halibut length/weight chart is close to 250 pounds of halibut. No wonder I couldn’t reel her in.

And we know it was a female because any halibut over 100 pounds is a female; they live longer and grow larger than males. If you’ve never seen a halibut, you’d be a bit surprised ... it’s a flatfish, with the left eye next to the right eye on the same side, a huge mouth with teeth ... a downright ugly fish! And this one was more than 200 pounds of ugly!!! Terry struggled holding the fish up to the surface so we could try to get a photo of it, but given it’s size, we decided to let it go and he clipped the line.

Heading back to Pelican, it began to rain ... we decided our timing was perfect.
And so was the day ... except we soon would be saying good-bye to Lee and Joann, losing another well-trained team of crewmembers ;)
At 5 p.m. they boarded their flight ... literally a half-minute walk down the dock from our boat ... and were flying to Juneau to begin their trek home. 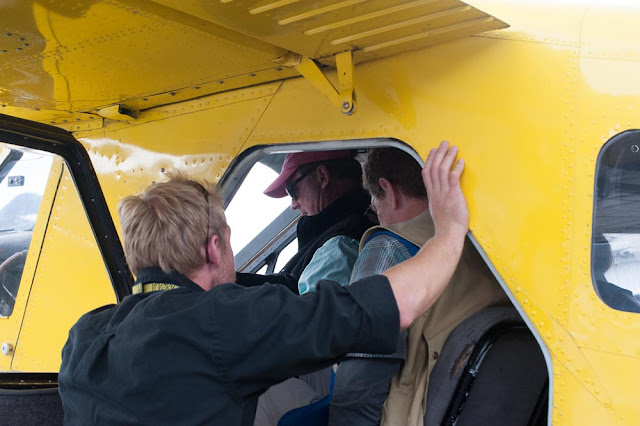 After a sad farewell, Roland and I kicked back, relaxed ... and told fish stories!!
Posted by Laura, Roland and Lovie Ricochet at 2:16 PM 2 comments: 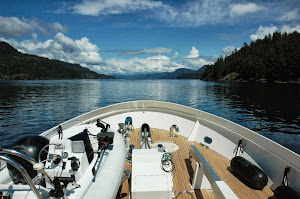 Laura, Roland and Lovie Ricochet
Engelenbak is a custom-built 62-foot steel trawler ... designed to cruise anywhere in the world.